THANK YOU FOR DOWNLOADING OUR APPLICATION NOTE:

Goal: Sodium caseinate is a milk protein that is used for foaming, thickening, and emulsifying food products. The structural characteristics of protein dispersions affect their properties as rheology modifiers and can be probed with viscosity measurements. The goal is to use the VROC® initium one plus in combination with the m-VROC® to access a broad range of shear rates. Utilizing the two instruments enables us to examine both the low shear Newtonian plateau as well as the shear thinning regime over a wide protein concentration range

Sodium caseinate (NaC) is a protein derived from casein (αs1-, αs2-, β-, and κ-casein), the most common protein in milk. It is widely used in food products due to its foaming, thickening, emulsifying, and texture modification properties. Sodium caseinate is amphiphilic and, under suitable conditions, can associate into charged & soft spherical aggregates/micelles in aqueous solution. An increase in concentration of sodium caseinate, and corresponding closer packing of micelles, increases the flow resistance, i.e. viscosity. Due to instrument limitations, previous studies on sodium caseinate samples focused on relatively low shear rates and only identified shear thinning behavior at higher concentrations. For this application note, we used multiple VROC® instruments to access relatively high shear rates and probe the shear thinning and concentration-dependent viscosity of solutions with concentrations between 1 and 13 wt.%. Our aim is to obtain a more proper understanding of the structural and rheological properties of sodium caseinate dispersions over a wide concentration range.

Sodium caseinate samples with concentrations cNaC = 1 – 13 wt.% were prepared at room temperature by mixing casein sodium salt from bovine milk (supplied by Sigma-Aldrich®) with deionized water and stirring overnight. The concentrations are approximate because testing was performed on the supernatant after centrifuging at 10,000 rpm. Samples with cNaC = 11 – 13 wt.% were additionally filtered with 0.1 or 0.2 μm pore size nylon syringe filters to remove large particles or aggregates that may have clogged the flow channel. Shear rate sweeps for apparent rates < 140,000 s-1 were performed with the VROC® initium one plus at 25°C and a combination of the B05 chip (depth = 50 µm & Pmax = 42 kPa) and E02 chip (depth = 20 µm & Pmax = 1800 kPa). The viscosity was measured for five segments for each shear rate. At least 70 µL of each sample was loaded with the retrieval feature activated so that all segments were performed with only one loaded volume. Apparent shear rates up to ~775,000 s-1 were probed with the m-VROC® at 25°C and the E05 chip (depth = 50 µm & Pmax = 1800 kPa).

Figure 1 shows the viscosity as a function of shear rate (log-log plot) for the sodium caseinate samples. Our measurements span shear rates ranging from as low as 50 s-1 to as high as 850,000 s-1. There is good agreement between the results from the multiple chips and the two viscometers used. It is shown that an increase in the sodium caseinate concentration increases the viscosity of the dispersions. In addition, the samples with concentrations cNaC ≤ 2 wt.% exhibited Newtonian behavior for the accessible range, while the samples with concentrations cNaC ≥ 3 wt.% exhibit a low shear Newtonian plateau prior to the onset of shear thinning. The true shear rates and viscosities have been calculated from the apparent values with the Weissenberg-Rabinowitsch-Mooney (WRM) correction. The onset of shear thinning shifts to lower shear rates as the concentration increases. For example, the cNaC = 4 wt.% sample exhibits shear thinning only above 170,000 s-1, while the cNaC = 12 & 13 wt.% samples exhibit such behavior above only 1,300 s-1. What’s more, the viscosity drop becomes more pronounced in the shear thinning region (power-law region) with increase in concentration. For example, from a shear rate of 1,000 to 100,000 s-1, the viscosity of the cNaC = 5 wt.% solution decreases by ~ 9%, while that of the cNaC = 13 wt.% solution decreases by ~ 80%, nearly an order of magnitude difference. Based on our knowledge, there are no studies in the literature demonstrating the shear thinning behavior of sodium caseinate solutions with concentrations cNaC < 14 wt.% or shear rates > 1000 s-1.

Figure 1: Viscosity as a function of shear rate of solutions at 25°C and with concentrations cNaC = 1 – 13 wt.%. Error bars correspond to three times the standard deviation. Solid lines denote fits with the Carreau-Yasuda model.

η0 is the zero-shear-rate viscosity and is set equal to the low shear Newtonian plateau viscosity. η∞ is the infinite-shear-rate viscosity and is set equal to the solvent viscosity (η = 0.92 mPa∙s). λ is a characteristic time scale of the fluid. n describes the slope of (η-η∞ )/(η0-η∞ ) in the power-law region, while a describes the region between the Newtonian plateau and the power-law region.


The parameters extracted by fitting with equation 1 are listed in Table 1. The table also shows the calculated time for sodium caseinate micelles to diffuse a distance equal to their diameter, t_D=((4πη0Rh3 ) ⁄ (kT)). The hydrodynamic radius is set to Rh = 11 nm (HadjSadok, et al., 2008; Dickinson, 2005). k is the Boltzmann’s constant and T is the temperature. The values of tD and λ increase with concentration and are the same order of magnitude. Therefore, λ may be indicative of the micelle diffusion time. The general trend for both n and a is to decrease with increasing protein concentration due to changes in the shear thinning behavior.

Table 1: Carreau-Yasuda equation fitting parameters and calculated time for sodium caseinate micelles to diffuse a distance equal to their diameter.

Figure 2 shows the relative viscosity ηrel as a function of sodium caseinate concentration. We define the relative viscosity as ηrel=η0/ηs , where ηs is the viscosity of the solvent (deionized water). The error bars, smaller than the size of the symbols, correspond to three times the standard deviation and show the high reproducibility of our viscosity measurements. Addition of sodium caseinate increases the viscosity from η = 0.92 mPa∙s for cNaC = 0 wt.% to η = 211 mPa∙s for cNaC = 13 wt.%. The viscosity increases due to the close packing of the micelles. Our data for concentrations 8 – 13 wt.% agree with results obtained by Khwaldia and coworkers (Khwaldia et al., 2004). The change in relative viscosity with concentration up to cNaC = 13 wt.% can be described with the generalized Mooney equation (Ross & Minton, 1977):

Here, the value [η] is the intrinsic viscosity in dL/g, k is a “crowding factor”, and v is a parameter whose value is greater than 2.5 for non-spherical particles. We fit equation 2 to our viscosity vs. concentration data, with Χ2 > 0.996, to obtain [η] = 0.22 dL/g and (k/v) = 0.17. We are not aware of other studies that use the generalized Mooney equation to model the viscosity dependence on concentration of sodium caseinate. In comparison, the intrinsic viscosity reported in the literature is [η] = 0.15 – 0.16 dL/g (de Figueiredo Furtado, et al., 2017; Pitkowski, et al., 2008). Discrepancies between values reported here and those found in the literature may be due to differences between batches of sodium caseinate used. 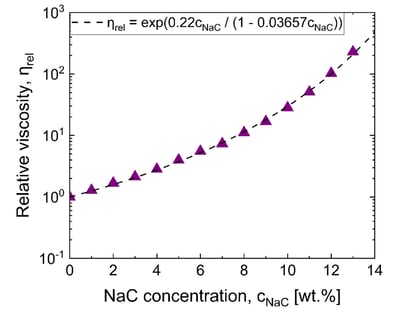 Figure 2: Viscosity as a function of sodium caseinate concentration. Error bars, smaller than the size of the symbols, correspond to three times the standard deviation. Dashed line corresponds to the generalized Mooney equation fit of the data.

The VROC® initium one plus and m-VROC® instruments can access shear rates typically not compatible with other viscometers, allowing for more robust protein characterization. The sodium caseinate protein samples exhibit shear thinning. As concentration is increased, the onset of thinning shifts to lower shear rates and the viscosity decrease becomes more pronounced. Furthermore, analysis with the Carreau-Yasuda and generalized Mooney equations provides parameters to characterize the structural properties of sodium caseinate dispersions, which are relevant in the food industry.

If this note is helpful, please let us know! If you have questions or need more information about this product or other applications, please contact us: 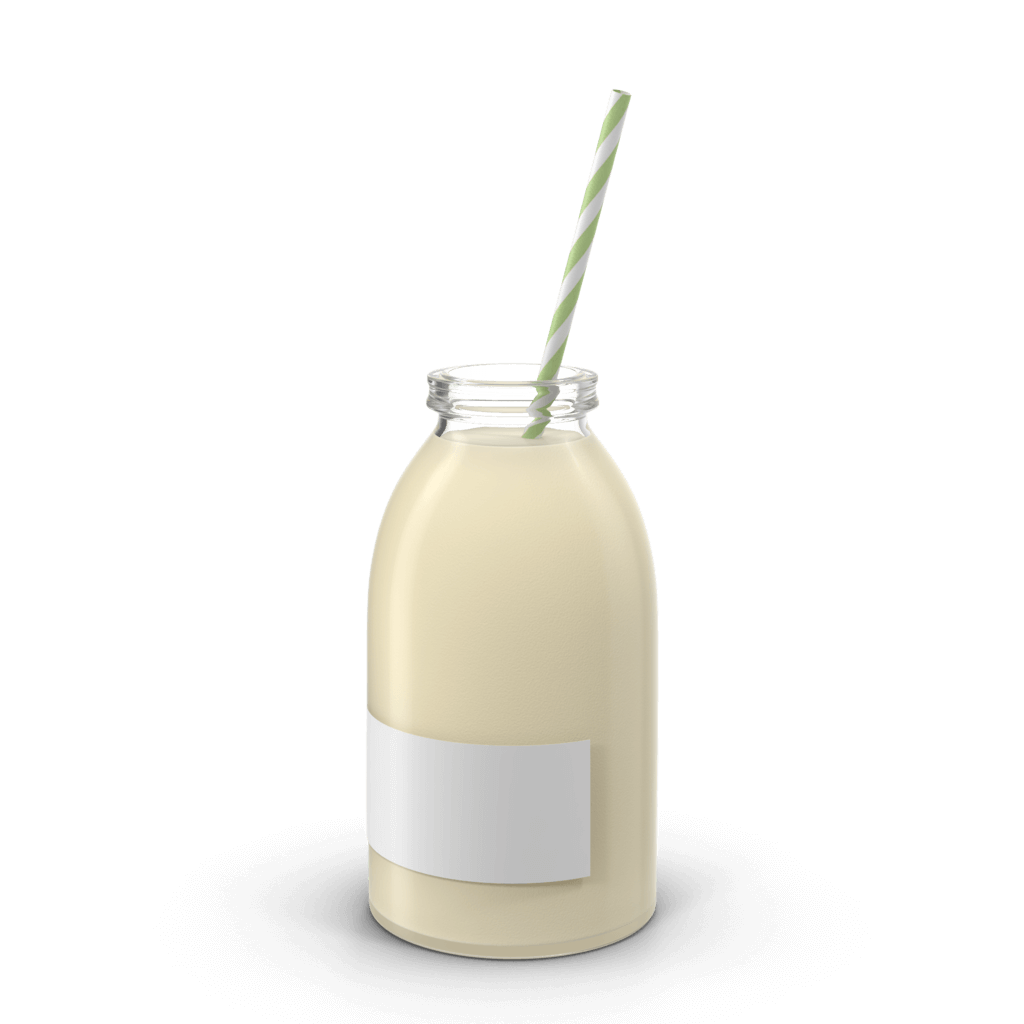 Learn More About Viscosity of Milk

Self Assembly in Complex Fluids